Population Issues: Maximum of 2 Kids To Every Nigerian Couple – Should This Hold In Nigeria?

Nigeria, the residence of diverse people, with great brains and blessed with rains to grow our grains.

I could go on to talk about how blessed Nigeria is, but I’m starting to look into the future of population issues in the country.

Standing in one corner of Oshodi, I looked around in every direction and was amazed at the manner in which people are trooping out of buildings, cabs, etc.

I said to myself: “this is the real representation of over-population”. As I listened to series of short, quick low-pitched sounds of people going to work, and loud voices of cab men (agbero), I started to look into the future of Nigeria’s population and serious issues of concern that will arise.

From North, West, East and South, people travel down to Lagos and just make it their home. (They say Eko is no man’s land).

If population pressures in Lagos are one of the factors associated with changing the capital of Nigeria to Abuja in December 12, 1991, I started to think about what should be done to tackle population explosion, not just in Lagos but in the country.

Over-population in its simplest form is when 5 people occupy a room that is meant for just two people. A bigger picture is when citizens of a country are more than the resources available or what the government can handle.

Uncontrolled population growth in Nigeria has been accompanied by an increase in social problems such as rising unemployment rate. A part of the population is out of work and poor living conditions lead to social evils.

Recently, commentators in several prominent U.S. publications have declared that the population explosion is over and concluded that population growth is no longer a serious policy issue.

One statistic commonly cited as evidence of this is the global decline in fertility rates (the number of children born per woman).

The sharpest declines occurred in East Asia–from 5.9 to 1.8–and Latin America–6.0 to 3.0.  United Nations projections suggest that the world’s population could begin to decline in about 50 years. 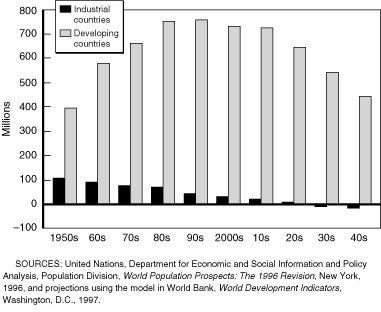 But, the world’s population is still growing. Although the rate of growth has been declining since the 1960s, global population grows each year by approximately 80 million people, or the equivalent of the population of a country the size of Germany.

Nearly all of this growth is concentrated in the developing nations of the world like Nigeria) many of which fertility rates remain high.

Uncontrolled birth rate can impose costly burdens on Nigeria. It may impede opportunities for economic development, increase health risks for women and children, and erode the quality of life by reducing access to education, nutrition, employment, and scarce resources such as potable water.

2 Minutes Video: If the population of the world is just 100 people

Can Population Be Controlled In Nigeria?

Planning, control and management are 3 key elements that must be inter-played to achieve population control in Nigeria.

Just as Abuja is known as Africa’s first planned city (though in terms of infrastructures), I think population can and should be planned and controlled.

Over Population Starts From the Source

“Uncontrolled birth rate is the key source of over-population issues in Nigeria”.

In every social stratum, we have 15% elite and 85% masses. If we focus on these 85% masses known as hoi polloi, masses or poor, they contribute drastically to the increased and uncontrolled birth rate in the country. Why?

On the average, each family in Nigeria has three to five kids in it. With a population of over 201 million people, equivalent to 2.55% of the total world population, and a median age of 18 years, birth rate in Nigeria have higher chances of taking a sky dive, resulting in highly uncontrolled population in the nearest future. If this occurs, economic conditions will be very harsh.

Should There be Government Regulation on This?

What if the government focuses on regulating the number of kids each Nigerian couple can have? (Let’s say maximum of 2 kids to every Nigerian couple)

Culture – a big determinant of peoples values, philosophies and decisions will play a major role in this I think.

Looking at this from different angles (taking into consideration human rights and individual freedom), there will definitely be clashes, merits and accompanying demerits.

I thought about population growth and brutal issues (unemployment especially) we’re all experiencing and what the nearest future will look like if something isn’t done.

I’ve heard people say nothing will work in Nigeria if there’s no law and order. They follow the ideology that law is too strong for the weak and too weak for the strong.

In essence, if other economic problems cannot be handled properly, population can’t be controlled.

[Tweet “Law is too strong for the weak and too weak for the strong.”]

Also Read: The top 20 largest state in Nigeria by population

Population Issues (Summary) What about you?

Maximum of 2 kids to every Nigeria couple, should this law hold in Nigeria?

Will you vote for this?

Is it the best way to tackle population growth issues?

If not, what would you suggest? Let’s have your comments, opinion and suggestions in the comment box below