What are the major sources of government revenue in any given country? I’m sure you’re not reading this post because you don’t have a clue; but you want details, isn’t it?

When you think about it, the structure of Nigerian government for example is one elaborate system that makes you wonder; “how does the government finance itself and other huge projects in the country?

More so, when you hear about passing the budget at the senate, you begin to sniff through business news or political news to understand how exactly trillions are been allocated throughout all sectors in the economy.

You’re being inquisitive my friend and that’s a good one. Every information you get will help you make informed judgement.

So, how about we find questions to your answers? Oh, I mean answers to your questions (yes, i won’t delete those, sometimes I like seeing my imperfection *winks).

Let’s take it from the beginning.

What Is Government Revenue?

Revenue in business terminology is the total amount of income generated from sale of goods or services, or any other use of capital or assets, associated with the main operations of an organization before any costs or expenses are deducted.

In governance or public sector, Government revenue is the money received by a government from taxes and non-tax sources to enable it to undertake government expenditures.

Hmm, government expenditures? We’ll talk about that in detail soon in this detailed article about sources of Government revenue.

In this article, you’ll understand the:

If you’ve gone through our detailed article where we discussed the relationship between the three levels of government in Nigeria, you’ll have a clue on how things work.

There are 3 levels of government in Nigeria: 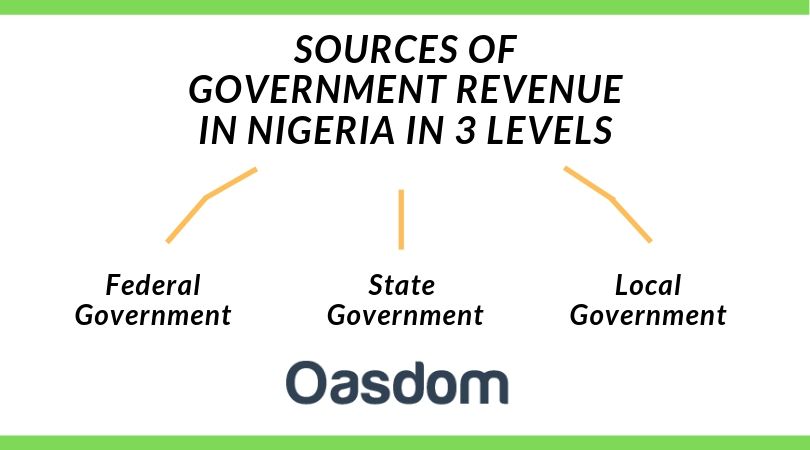 A. Federal Government Sources of Revenue

As the aim of the Federal Government is to provide public amenities like power supply, electricity, education, security, one of it’s major responsibility is to generate revenue for the country and its states.

It goes without saying that the Federal Government earns revenue from mineral resources extraction.

Sources of Federal government revenue include:

When it comes to tax systems, taxes are of various types. The Federal Government get revenue via Direct taxes through the Federal Inland Revenue.

Government sources of revenue through Direct taxes include:

Also, revenue is derived from indirect taxes such as:

Sources of government revenue in Nigeria can be via mining activities such as:

Statutory allocation: Grant from the Federal Government to the states. The revenue allocation by statute is as follows:

Other revenue sources of the state government include:

As seen above, major revenue source of the local government is 20% allocated by the Federal government.

Learn more: How does the government allocate revenue? 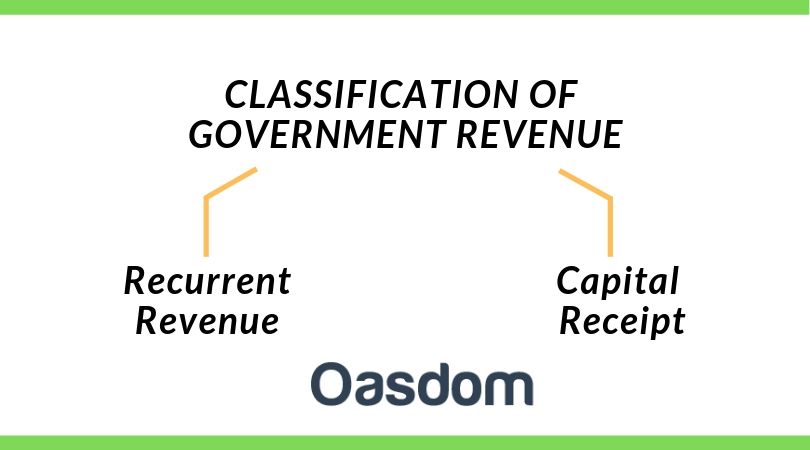 The Government revenue estimates can be classified into 2:

Capital receipt is the revenue that accrues to the government through loans and grants from local and foreign sources which are tied to certain projects.

So, what is government expenditure?

Government spending or expenditure includes all government consumption, investment, and transfer payments. It could be government acquisition of goods and services intended to create future benefits, such as infrastructure investment or research spending.

Government expenditure is classified into 3: 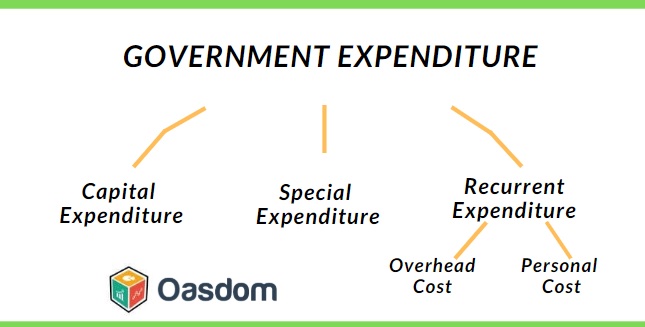 Let’s take it one after the other:

These are payment for central items for the long term use of the government, for the purpose of altering its pre-determined objectives e.g purchase of heavy plants and generators, furniture and equipment, motor vehicle, aircraft for the presidency, etc.

These are the costs of running the day-to-day activities of the government departments. It includes wages and salaries, transport, maintenance of building, purchases of drugs for hospitals, servicing of cars, etc.

Overhead Cost: These are day to day expenses of a general nature and include general repairs and maintenance utilities.

Just like businesses, the government of every country needs funds to finance the smooth running of the affairs of the country and to ensure this, revenue realization must be on point.

In most cases, taxes are one of the major sources of government revenue in Nigeria and it is the same for many countries.

What if taxes are not paid by citizens and company income taxes are not received? Well, that’s why the Federal Inland Revenue Service are put in place.

Previous article
What Is Simi Net Worth?
Next article
Here’s How to Get Quick Cash with Bad Credit