Government revenue allocation is one aspect of governance that grabs the interests of politicians and citizens of the country.

In our previous post on the major sources of government revenue and government expenditures, we’ve talked about how the Federal government derives its revenue from different sources.

The revenue realized is paid into a the consolidated revenue fund. But how does the government allocate this revenue? What is the sharing formula?

Before we go about that, you should know more about:

The Revenue Mobilization Allocation and Fiscal Commission is a corporate body that occupies a very strategic position in the fiscal administration of the Nigerian government.
RMAFC is the regulatory body in charge of the revenue allocation in Nigeria. The powers of the Revenue Mobilization Allocation and Fiscal Commission are as vested on the
Commission by the 1999 Constitution under the Third Schedule Part 1 N-item 32 are as follows:
The Commission shall have power to –
The Commission is equally empowered to determine the remuneration appropriate for political office holders including the President, Vice President, Governors, deputy governors, Ministers, Commissioners, Special Advisers, Legislators (including the national assembly members) and holders of offices mentioned in sections 84 and 124 of the 1999 constitution.

Fundamentally, there are two components of the revenue allocation formula used for the disbursement of the Federation Account to the three tiers of government:

This formula shows the percentage allocated to the three tiers of government i.e. federal, states and local governments.

This formula is applied vertically to the total volume of disburseable revenue in the Federation Account at a particular point in time.

The VAF allows every tier of government to know what is due to it; the Federal Government on one hand and the 36 States and the FCT and 774 Local Governments on the other.

Through the application of the principles of horizontal allocation formula, the allocation due to each State or Local Government is determined.

The approved Allocation of Revenue (Federation Account, etc.) Act of 2004, states as follows: 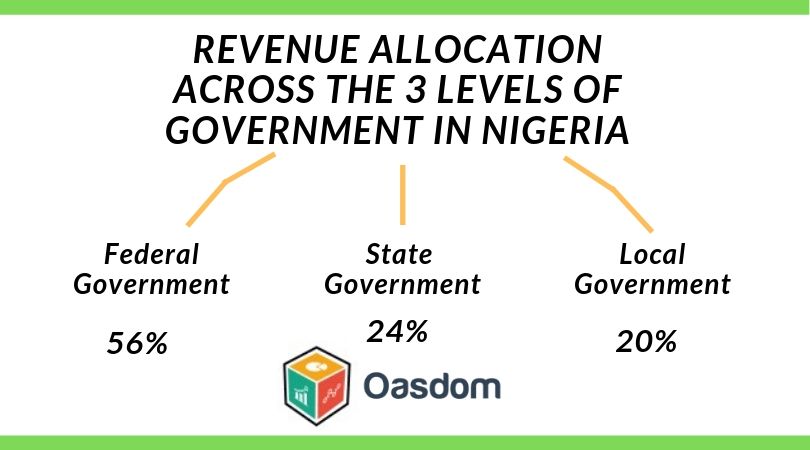 So, how does the Federal, state and local government utilize funds allocated to them from the Federation account?

The 56% of total revenue allocated to the Federal government will be utilized/distributed as follows:

The 24% standing to the credit of all the states, from the Federation Account shall be distributed among the 36 states of the Federation.

The factors for distribution are specified in the Act as follows:

(a) Land Mass: Land mass of a state of local government shall be the proportional area size (PAS) of the State or the Local government to the total size of Nigeria, and shall be donated as follows:

For each local government:

(b) Terrain: Allocation due to terrain is made on the basis of the proportional area size of the three identified major terrain types present in the State or Local government area respectively, which are:

(c) Education: This parameter for allocation to Social Development Factor (SDF) shall be measured in terms of primary schools enrollment which attracts 60% of the allocation, while the remaining 40% is made using secondary/commercial school enrollment.

(e) Water: This as a parameter for allocation to social development factor shall be represented by the mean annual rainfall in the state headquarters and territorial spread of the state.

The 24% allocation to the 36 states and Abuja treated as a State for this purpose is redistributed, using the following criteria:

Also Read: The relationship between three tiers of government in Nigeria

Not quite long, on May 21, 2019, the FAAC distributed the sum of N616.19bn from the federation account to the three tiers of government as revenue allocation for the month of April.

Composition of the FAAC

The Federal Accounts Allocation Committee are:

The Permanent Secretary of the Federal Ministry of Finance or representative as designated by the said Minister, is the Secretary.

The major functions of the FAAC is to ensure that allocation made to the States from the Federation Account are promptly and fully paid into the Treasury of each state, on basis and terms prescribed by law.

Also, FAAC is to report annually to the National Assembly in respect of its functions specified above.

Composition of the Committee include:

To ensure that government revenue reaches the grass root at the local government, the State Joint local Government Account Allocation Committee – SJLGAAC has been put in place.

This committee is set up to ensure equitable distribution of the statutory allocation to local governments from the Federation Account and 10% of the internally generated revenue of the appropriate State Governments are shared to the beneficiaries, in accordance with the 199 Constitution, using the criteria as Equality, Population, Primary School Enrollment and Internally Generated Revenue Data.

Previous article
Science of The Skin – The Largest Organ of The Body
Next article
Ladoke Akintola University of Technology: LAUTECH Courses