In an economy where it’s so difficult to earn a living, many Nigerians try out current ponzi schemes or latest pyramid schemes, with the hope of making huge profit.

The need to make it in life has always been a constant nagging in most of us, and so many struggle and the more ambitious ones struggle harder.

Unfortunately, as much as we struggle there seems to be no light at the end of the tunnel and with the current situation in Nigeria many invest in any Ponzi scheme or pyramid scheme as they call it, to stay afloat. Also, some turn to betting sites in Nigeria and try to earn alongside their love for sports.

The Ponzi scheme has always been called a scam with its unbelievable returns and its failings, right from Charles Ponzi to Bernard and co. This made financial securities tighter to eradicate or bring to minimal.

Though Ponzi schemes seem more secure but painfully, it gets more people to take its reins to lead more people than ever into financial destruction.

With the current situation in Nigeria, it is of no surprise that more Nigerians still dive into the pool of any new Ponzi scheme. I mean who would not want to make it in Nigeria?

So I’ve put together top 7 current Ponzi schemes in Nigeria.

These 7 ponzi schemes are just a few among many other pyramid schemes that has evolved when it all started this year.

Though these current ponzi scheme sites did not make the list of top 21 most visited blogs in Nigeria, they’re are quite popular.

GHW presently known as GET HELP WORLDWIDE EXCLUSIVE claims to be a mutual aid and crowd funding scheme.

This scheme offers a better platform to operate than MMM. It would seem like they look thoroughly into the popular MMM scheme and decided to make theirs better by targeting all shortcomings of MMM and correcting them.

This latest Ponzi scheme offers a 30% cash ROI and 50% in 30 days via Bitcoin – the latest and trending cryptocurrency in the world today.

Quick Look: Here’s how to do bitcoin investment in Nigeria

Now the question is why would this Ponzi scheme be considered better than MMM? GHW offers a platform with no guiders unlike MMM, and so there are no ridiculous or exaggerated amounts and returns.

There’s a re-commitment in 3days or the user risk been blocked, as if that is not enough. It has a credibility score for every member on their profile which must not be equal to or less than zero as this also brings about blockage from the site.

All Ponzi schemes involve pledging and paying but GHW does not allow for pledge less than the member’s last pledge.

All these rules, amongst others, put in place points us in the direction of thinking GHW is not going anywhere soon as it also does not rely on new investors to make money. 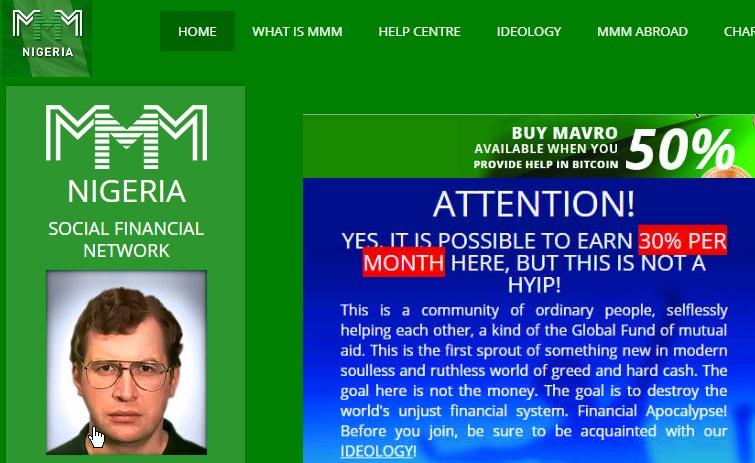 The mavordi mondial money box cannot be exempted in the list of the world largest Ponzi schemes.

Dating as far back as the nineties, started in Russia and also had its fall out in Russia but it would seem MMM is quite stubborn or resilient, be it whatever you might call it, and bounced back aiming at not only Russia but more than 20 countries.

The famous MMM came into Africa and was the latest Ponzi sheme in 2016 but it could not pass by without leaving its footprints in this continent. It entered into Nigeria, the giant of Africa, and it is dated to November 2015.

As usual, underground whispering began then became rumors then became warnings but even MMM could not succeed at first due to the sharp-wit of Nigerians, the country was not providing the backbone its people needed and by late 2016, MMM has started rooting among Nigerians.

MMM, with the vision of financial apocalypse that promises to break financial chains of slavery and make all equal, offers a 30% ROI in 30days.

It was true to its words but it was reported on the 13th of December, 2017 that all members account had been frozen for negative publicity and overloading of the system and it developed its popular ‘Moku Mogbe Modaran’ name.

Presently, MMM Nigeria is paying and more Nigerians are joining with its new proposed weekly payments though it’s currently on hold as it is said that upgrades are going on.

This new Ponzi scheme swooped in immediately after MMM broke the hearts of many Nigerians and though quite surprising Nigerians still plunged into it.

Possibly because of its timing as it paid and was true to its promises, Claritta was making wave, but every Ponzi scheme is like that till it falls.

Despite all efforts, which included privatizing the domain registration, by the owners of this site to hide their identities; the source of the site can be traced to FASTDOMAIN, INC. which is said to be the domain company where the name was created.

Yet information is out that this Ponzi scheme is said to be registered by a Nigerian, on 30th of January, 2017.

CLARITTA offers seven days ROI with a member (mr A) paying #1500 to another member of CLARITTA and mr A gets #1500 each from 4 other members.

It also offers a referral bonus which involves 3 members paying a member who referred someone #1500 each. Mathematically, this Ponzi scheme offers #6000 ROI in 7 days and #4500 referral bonuses in 4days.

Unfortunately, 10 days after its launch, Pageone reported CLARITTA as a Ponzi scam to have collapsed without any valid reason except for the concluded reason behind every Ponzi scheme of the number of persons injecting money into the sham lesser than those bringing money in.

Although, CLARITTA claimed otherwise and maintained its site to be under maintenance. CLARITTA is back but it is not guaranteed it won’t collapse any time soon. 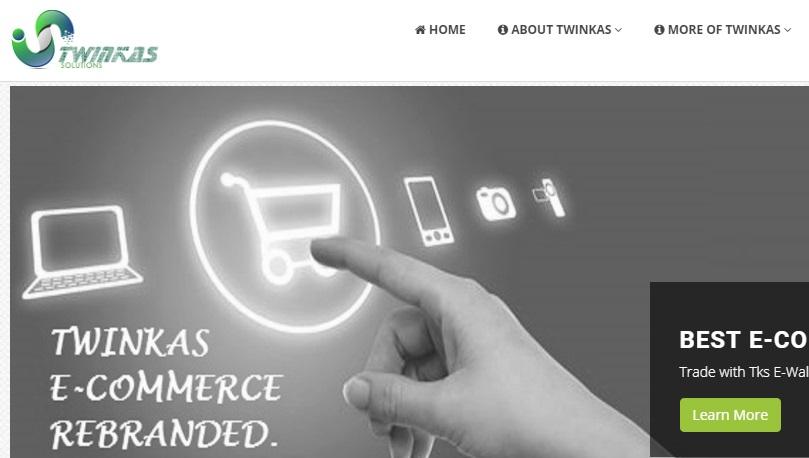 A scheme which claims to be REST (reliable, efficient, sustainable and trustworthy) offers rest to its members. I mean like seriously?

TWINKAS offers a 100% and more cash ROI in less than or 21 days with a 5% referral bonus or commission. It does not interfere with transaction between the payer and payee and has a time limit of 24 hours for pledge payment and activation.

This scheme has been said to have disappeared but it is also said to be back again and some people are giving their testimonies on it.

This is one of the current Ponzi schemes as it is an upgraded MMM Nigeria Ponzi scheme with automated system that prevent moratorium as can be found in the former.

NNN Nigeria was launched in August 2016 and has the same ideology just as MMM. It is claimed to be owned and ran by the participants.

An upgraded version of MMM with a launch date just few months before the former version suspended their activities due to the reasons this new Ponzi scheme was upgraded leaves much to be suspected.

The matching formula is claimed to be known by an Ai software. It makes use of Navro, a measurement unit for help provided to other members in the scheme, which is equivalent to Naira.

The new Ponzi scheme was launched on the 1st of March, 2017. Owners of this platform are not known as it is also claimed to be created for the people and for the people, and so rely greatly on the participants to keep it going.

This scheme involves creation and fulfillment of dreams, be it paying of loan, building house, etc.

The scheme has claimed to have some features which include the use of secret pin known to the CMA holder only, protection of the site by SSL security, use of auto confirm for bitcoins pledges to eliminate fake payments.

It did not stop there, it also has a re-commitment of 30% of withdrawal amount and the guider must have 40 active members, to rid the scheme of the guiders problem that seem to be a major pulling down for most schemes.

It uses both cash and Bitcoin with a 40% cash ROI and 50% Bitcoin ROI in 30days. Other bonuses of the scheme include the 10% referral bonus, 3% audio testimony bonus, 1%-5% guiders bonus, among others.

Launched on June 1st, 2017, this is one of the current Ponzi schemes that offers platform of no upgrade issue, verification of phone number, no allowance of multiple accounts, provision of help at any time.

It is said to use a security system of commodo HTTPS. This scheme has its get help in hours between 6am – 8am and 6pm – 8pm.

This Ponzi scheme also offers a 50% cash ROI and has a time limit for pledges payment which is 6 hours. Participants get help within 1 – 24 hours after providing help to fellow participants of the scheme.

Members thinking they can play smart and do not conform to the scheme rules are said to be blocked automatically.

And there you have it, my list of 7 current Ponzi schemes in Nigeria 2017 and details about each.

What you think about latest and current Ponzi schemes in Nigeria? Let’s have your comment in the comment box below.