Every time I get people asking me if its appropriate for a guy to be ask a lady out despite seeing her putting on “an engagement ring” and I would always say, “There ain’t nothing wrong with that”.

Possible Reasons a Guy Gives You a Ring

If a guy gives you a ring it could mean any of these:

The Difference Between Engagement & Proposal

Before you start dreaming about prewedding pictures and bridal train dresses, let’s go a little bit into educating ourselves on engagement and proposal, the differences and the true meaning in the African sense.

Engagement: (countable or uncountable) the period of time when marriage is planned or promised

(legal): The offer by a party of what he has in view as to an intended business transaction, which, with acceptance, constitutes a contract. 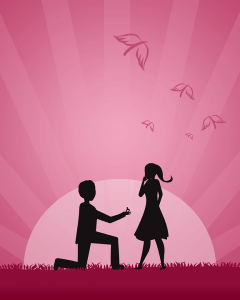 The reason I’m giving the definition of both words is to let you know where most people are making the mistake.

When a guy gives a lady a ring its a proposal and not an engagement which in other words means its better or more appropriate for u to say “He proposed to me” instead of saying he engaged me and hereby keeping off prospective serious guys.

In Africa, proposal (wedding rings giving) is a less respected ceremony unlike engagement. To an average African, before you tag yourself engaged, the guy is expected to have been shown to your parents and other family members for approval.

This will undermine any prior “wedding rings giving” ceremony, as parents and other family members can still nullify any prior agreement made with the guy, depending on several reason ranging from religious, ethnic, health, beliefs, norms or even perception etc

It is quite shocking these days when a girl keeps other guys off in the name of “I am engaged” without knowing his full intention and having gotten the approval of both parents.

Even more shocking is when some of this girls can’t even wear this so called engagement rings to their parents house just because they want to avoid questions they can’t answer.

I’m not against you accepting a ring from a guy, I’m just saying you shouldn’t waste your time with a guy all in the name of him giving you a ring without showing you his blue prints of the future, and you seeing where your name is boldly written!

Ladies, until you’re able to determine a guys true intentions, stop telling off prospective “husbands” in order to avoid stories that brings tears to the eyes, hurt to the heart and a decision of a lifetime hatred for men.

This is just my own perception, so feel free to oppose or support. Thanks