Watching the World
By Oasdom
January 6, 2020

“Pray for Australia” is the latest trend on social media.

The recent occurrence of wildfires in California and the Amazon jungle made us all stand in solidarity and pray for the innocent victims of the area.

However, these fires affected a relatively smaller piece of land when compared to the current blazes that have engulfed a good portion of Australia.

As of this writing, approximately 12 million acres of land have been burned in Australia from the fire that started during the last months of 2019.

Authorities also report that almost half a billion animals have been killed due to the incident while several lives and homes are lost.

According to The NewYork Times, the bushfires grew more severe amidst the heatwave and draught conditions in Australia.

Unfortunately, the fires are expected to escalate further as the weather gets warmer in the continent.

Scientists also predict the fires to become more frequent and severe all over the world in connection with climate change.

See the image below to see figures from Statista 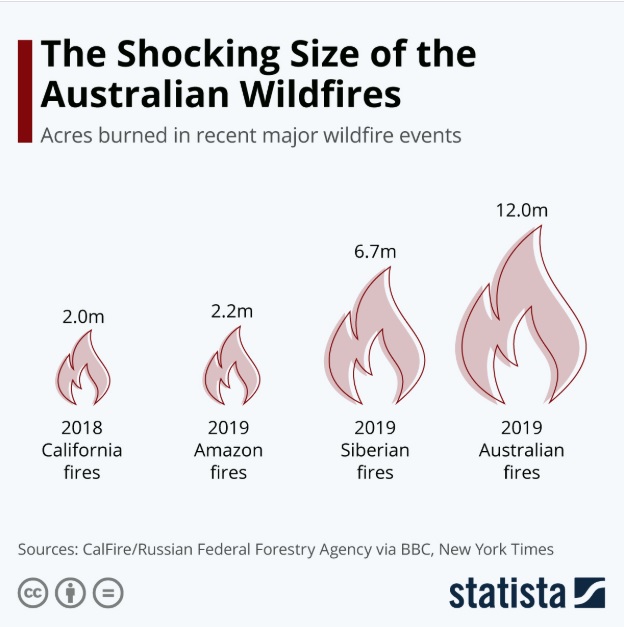 The firefighters have managed to put out the California fires while Amazon blazes have been reduced at least.

The fires in remote areas of northern Russia have engulfed more than 6 million acres of land as well but most of the area was scarcely populated – thus no causalities have reported.