It is always so exciting when we hear or talk about some major rivers in Nigeria, and thank God, that will be the subject of discussion in this post.

As Nigerians, while growing up, we’ve had the opportunity of going to rivers to play, swim, fetch water for the household and do a lot of other things. Without any dispute, this is always part of the memories of every Nigerian.

As a young girl back then, I was always excited and eager to go to the river. It’s not as if I can swim or have a special mission there, but the sight of it gladdens my heart and heal my soul.

Then, I used to wonder, where is this river coming from and where is it heading to?

This article is centered on the major rivers in Nigeria, its importance, characteristics and location of rivers on the map of Nigeria. 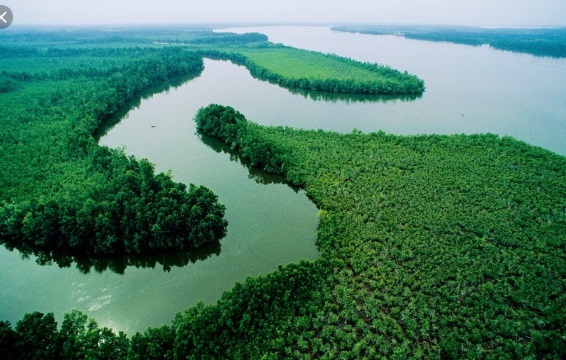 Before I go into full details of that, it is important to know what a river is.

A river is fresh water flowing across the surface of the land, usually to the sea.

The great majority of rivers flow into a larger body of water, like an ocean, sea, or large lake.

Rivers are natural gift to man and very important and useful for human consumption.

It carries water and nutrients to areas all around the earth. They play a very crucial part in the water cycle, acting as drainage channels for surface water.

In order not to waste much time talking about what a river is, I’ll go into the subject of the discussion by talking about its importance.

Rivers are very important in our day to day activities as water is important to life.

The importance of Nigeria Rivers generally cannot be over emphasized. It provides us with food, energy, recreation, transportation routes, and also water for irrigation and for drinking.

When it comes to the economic nature of Nigeria, the importance of rivers is even more amplified.

These two rivers provide a major landmark in the landscape of Nigeria.

The Rivers Niger and Benue are the power houses behind Nigeria economy.

There is no economy without electricity, therefore, Nigeria uses these two rivers to generate its electricity with the use of Hydro Electric Power.

This requires substantial amount of water provided by the confluence of the two rivers. This confluence provides the needed volume and speed to power the energy for the generation of electricity not only for Nigeria but other West African countries.

Rivers Niger and Benue are the main source of irrigation for all farmers. Most production and large scale farming happens around the banks of these two rivers.

During the regime of President Olusegun Obasanjo, the government took the initiative to settle displaced white farmers from Zimbabwe, they all chose to stay and farm around the Rivers Niger and Benue.

These farmers are highly mechanized and the two rivers provide a ready source of water for their crops, livestock and for their own survival as well.

Many rare plants and trees, as well as certain species of fishes, mammals, reptiles and insects, can only be found to thrive in or by the river.

Numerous aquatic and amphibious organisms make their homes and extend their habitat to the river.

In addition, other animals use the river for food and drink. In the African plains, mammals such as buffaloes, lions and giraffes go to the river for water to drink and fish.

Another importance rivers provide is the travel routes for exploration, commerce and recreation.

Some major rivers in Nigeria are used for transporting goods from one place to another for human consumption.

Read also: How to start a successful Transportation Business in Nigeria

When we talk about the characteristics of Nigeria Rivers, we talk about its source, significance and cultural heritage as related to Nigeria.

Nigeria Rivers have shaped the history of Nigerians as it is part of their cultural heritage and values. It provides drinking water, food, irrigation, and transportation routes.

Apart from the water, food, irrigation and transportation routes it provides, it is believed in every African setting that river is a natural gift from God.

Therefore used for all kinds of supernatural exercises and also, it serves as a natural source for healing and a means to give supplications.

Traditionally, Nigeria, which is known to be an African country, uses rivers to perform some of its rites and sacrifices to appease their gods.

Some of these rivers like the Osun River is highly recognized and held with high esteem by the Yoruba ethnic group, especially the people of Osun. It has its own history and significance to the people.

To know how important rivers are to Nigeria; there are some list of states named after some rivers in Nigeria, they include; Niger State, Benue State, Kaduna State, Cross River State, Ogun State, Osun State and many others.

The following are the list of major rivers in Nigeria and their location:

River Niger is the longest river in Nigeria and West Africa and also one of the deepest rivers in Nigeria. It is the principal river in West Africa.

It is also the third longest river in Africa exceeded only by the River Nile and River Congo; its tributary is the Benue River.

Its source is the Guinea Highlands in Southeastern Guinea and discharges to the Atlantic Ocean through the Niger Delta.

The Niger River has one of the most unusual routes of any of the major rivers in the world. It follows a northeasterly course towards the Sahara Dessert before turning Southeast to discharge in the Atlantic Ocean.

The unusual geography is because it is two ancient rivers joined together to a single route. It is one of the major rivers in Africa.

It extends through 2,597 miles or 4,100 kilometers surging through four other countries – Guinea, Mali, Niger, and Benin.

The modern nations of Nigeria and Niger take their names from the river, marking contesting national claims by colonial powers of the “Upper”, “Lower” and “Middle” Niger

The Benue River, formerly known as the Chadda River or Tchadda, is a major tributary of the Niger River, is the second longest river in Nigeria, extending for a length of 870 miles.

Being one of the most navigable rivers in Nigeria, it is an important transportation route in the regions through which it flows.

It rises in the Adamawa Plateau of Northern Cameroon, from where it flows west, and through the town of Goroua and Lagdo Reservoir, into Nigeria South of the Mandara Mountains, and through Jimeta, Ibi and Makurdi before meeting the Niger River at Lokoja.

Must Read: List of Middle Belt States in Nigeria

At the point of confluence, the Benue exceeds the Niger by volume.

The Kaduna River is the third longest major river in Nigeria, covering a distance of 342 miles. It is found in Kaduna State, one of the richest states in Nigeria.

It got its name from the crocodiles that lived in the river and surrounding area. The name “Kada” means crocodile in Hausa, Kaduna is the plural form.

The river was so named because of the presence of large number of crocodiles.

It starts in Plateau State on the Jos Plateau 29 kilometers (18ml) Southwest of Jos town, flows through its namesake Kaduna State and through its capital Kaduna, and meets the Niger River in Niger State, one of the largest states in Nigeria.

Kaduna River is a major tributary of River Niger and flows until it meets the Niger State.

It is a major source of livelihood for nearby communities as they depend on the river for fishing and transport.

The Gongola River is found in Northeast Nigeria, Adamawa State, the principal tributary of the Benue River.

It is the fourth longest major river in Nigeria, flowing through a distance of 330 miles.

The Gongola River rises on the Eastern slopes of the Jos Plateau and falls to the Gongola Basin, running northeasterly until Nafada and then continued in the same direction to Lake Chad.

Presently, it turns South and then Southeast until it joins the Hawal River. The river then runs south to the Benue River, joining it opposite the town of Numan.

The upper course of the river as well as most of its tributaries are seasonal streams but fill rapidly in August and September.

The lower reaches of the river are impounded by the Dadin Kowa Dam near Gombe and the Kiri Dam further below. This has helped control flood peaks downstream.

Cross River is the most prominent rivers in Southeastern Nigeria and one of the major rivers in Nigeria, it is the fifth longest in Nigeria.

It is known to originate from Cameroon; its native name is Oyono (Nigeria) and Manyu (Cameroon) respectively.

It covers a distance of 304 miles flowing through swampy rain-forest as mentioned above, forming an inland delta near its confluence with the Calabar River into the Atlantic Ocean.

Other rivers in Nigeria include:

Related Post: 20 Mineral Resources in Nigeria and their Location 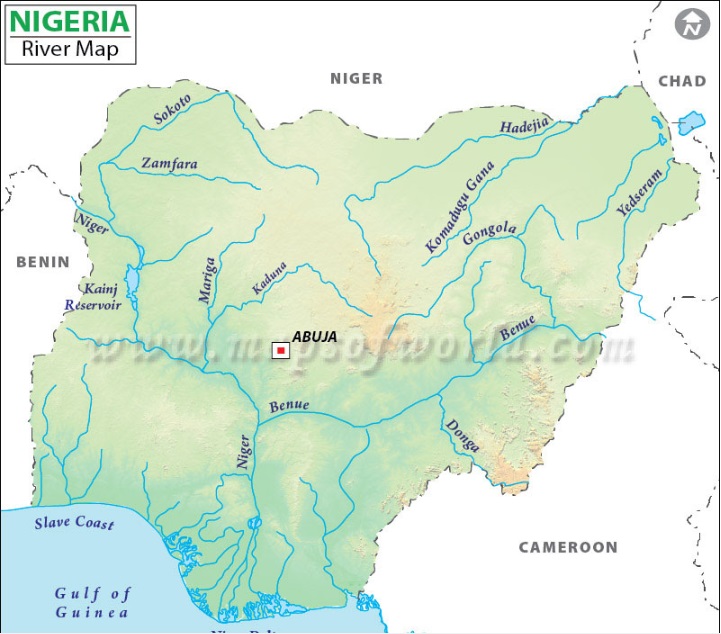 Conclusion on Major Rivers In Nigeria

Rivers play a significant role in the day to day activities of the human race.

Communities living near rivers are especially dependent on the water supply to irrigate their crops.

Major rivers such as River Niger, offers a source of livelihood through fishing and selling of surplus fish to the market for human consumption.