[Explained] The Eclipse of The Sun – All You Need to Know

When you hear the word eclipse (eclipse of the Sun, lunar eclipse, total & partial eclipse) what comes to your mind? An eclipse happens when a planet or a moon gets in the way of the sun’s light.

This quick article presents you with information about eclipse of the Sun:[toc]

What is Eclipse of the Sun?

Eclipse of the Sun or solar eclipse occurs when the Moon passes between Earth and the Sun, thereby totally or partly obscuring the image of the Sun for a viewer on Earth.

That means during the day, the moon moves over the sun and it gets dark. In other words the sun, moon and earth line up, with the moon in the middle.

Isn’t it strange that it gets dark in the middle of the day?

A total eclipse of the sun occurs when the Moon’s apparent diameter is larger than the Sun’s, blocking all direct sunlight, turning day into darkness.

But the moon also happens to be about 400 times closer to Earth than the sun (the ratio varies as both orbits are elliptical), and as a result, when the orbital planes intersect and the distances align favorably, the new moon can appear to completely blot out the disk of the sun.

There are actually two types of shadows: the umbra is that part of the shadow where all sunlight is blocked out. The umbra takes the shape of a dark, slender cone. It is surrounded by the penumbra, a lighter, funnel-shaped shadow from which sunlight is partially obscured.

Total Solar eclipse occurs about every year and a half somewhere on Earth. A partial eclipse of the sun occurs when the moon doesn’t completely cover the sun and it happens at least twice in a year someplace on Earth.

Lunar eclipse also referred to as eclipse of the moon occurs when the Sun, Earth and Moon are aligned, with the earth in the middle blocking sunlight from reaching the Moon.

During this moment, the moon can also look reddish. The reddening of the moon, or the blood moon phenomenon, is due to light from the sun being scattered by Earth’s atmosphere.

The light traveling from the sun to the edges of the Earth is forced to pass through thick layers of Earth’s atmosphere. Sunlight bending through the atmosphere and absorbing other colors is also why sunsets are orange and red. 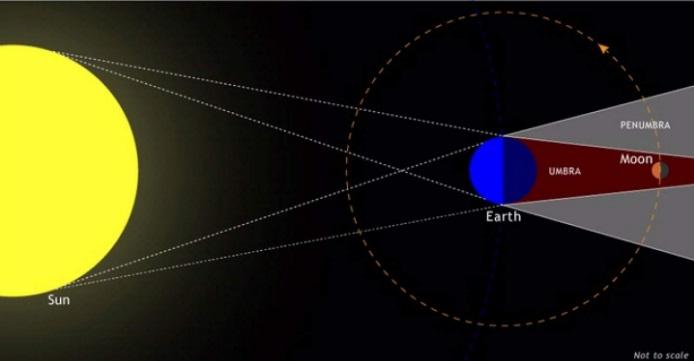 During a total lunar eclipse, the moon is shining from all the sunrises and sunsets occurring on Earth! But how big is the moon? Read that for more information.

The Difference Between Eclipse of the Sun and Moon

It’s easy to get these two types of eclipses mixed up. An easy way to remember the difference is in the name.

The name tells you what gets darker when the eclipse happens. In eclipse of the sun, the sun gets darker. In a lunar eclipse, the moon gets darker.

What Do You See During a Total Eclipse of the Sun?

If you’re in the path of the total solar eclipse, you should know you’re about to experience a rare moment!

According to Vox the first thing you’re going to see is a partial eclipse: the moon slowly starting to obscure the sun. For most of the country, this is all you’ll see. It’s pretty cool.

When totality nears, that’s when the show really begins. There are a couple of awesome phenomena that you can look out for.

Right before totality, the last glimpse of light from the sun will form a “diamond ring” in the sky.

You’ll also be able to see “Baily’s beads” (named after astronomer Francis Baily) — bits of light poking through canyons and craters on the roughed-up surface of the moon.

Then comes totality: The moon is fully covering the sun.

Related: 12 things that would happen if the sun disappeared

Depending on your location, this will last for about two minutes (in other eclipses, it has lasted for as long as seven).

Permanent eye damage can result from looking at the disk of the Sun directly, or through a camera viewfinder, or with binoculars or a telescope even when only a thin crescent of the Sun or Baily’s Beads remain.

The 1 percent of the Sun’s surface still visible is about 10,000 times brighter than the full moon. Staring at the Sun under such circumstances is like using a magnifying glass to focus sunlight onto tinder.

The retina is delicate and irreplaceable. There is little or nothing a retinal surgeon will be able to do to help you.

Never look at the Sun outside of the total phase of an eclipse unless you have adequate eye protection.

First the next Total Solar Eclipse Will be on Monday, August 21, which will cut through the United States. Learn more.

Eclipse of The Sun Calendar

The table below by EclipseWise lists every solar eclipse from 2011 through 2030. Click on the eclipse Calendar Date to see a global map showing where the eclipse is visible from.

Previous article
Olamide Badoo: 5 Business & Life Lessons From Him
Next article
Quick View: Data Centers – The Brain of the Internet