Watching the World
By Adelaja Boluwatife
May 31, 2020

Do you want in-depth information about Nigerian police ranks and their symbols? We’ve got you covered.

We see them in our communities, we see them on our high ways; Nigeria Police, in their uniforms carrying out their security duties.

I can’t help but question the fact that these officers still demand money on our roads, so I wanted to know about Nigerian Police Ranks and their salaries.

Come to think of it, we’ve heard a series of salary increment given to the Military and Police Force by the Federal Government but seems it’s changed nothing.

I believe that we are all becoming too familiar with the Police force particularly in Nigeria, due to the rapid increase in crime rate.

I don’t think a day will pass in this country and we won’t get news about one crime or the other either on the internet, radio or television. To be honest, this is discouraging.

Assuming it was around 1:00 am in the morning, then you woke up only to hear some strange sounds and unusual movement; your heart skipped and your mind started racing. Opening the curtain, you saw fully armed robbers in your compound.

Now you’ll agree with me that the Police force cannot be underestimated in society.

Police officers are readily available everywhere in the country, both in the rural and urban settlement, even in places where goats and sheep sleep on the road for 24 hours without disturbance.

Don’t mind me if you stay in such an environment…just kidding anyway. 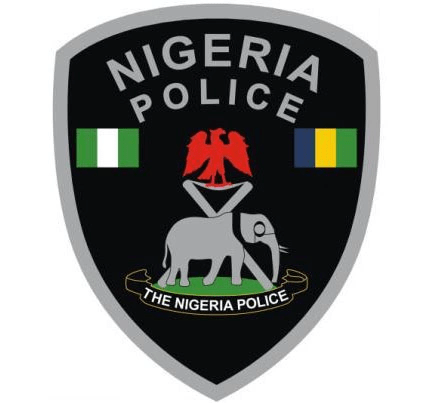 I believe that there are many people out there that have desired to work in the Nigerian Police Force.

This has prompted me to talk not only about the Nigerian Police ranks and their salaries, but also to enlighten you on their duties and many more. So, come along with me.

The Nigeria Police force have over the years acquired a very good image in the country. In 1820, the Nigeria Police Force was established, and it began with officers from the eastern part of Nigeria.

The first person to have the highest rank in all the police force is Commissioner General Colonel KK. Later, 1,200 members of the paramilitary Hausa constabulary was formed in 1879.

You should learn more about this constabulary of a thing in our post about Nigerian army ranks and symbols.

In 1896, the Lagos Police was established. By 2008, the Nigerian police ranks and officers had over doubled in size having about 371,800 personnel. 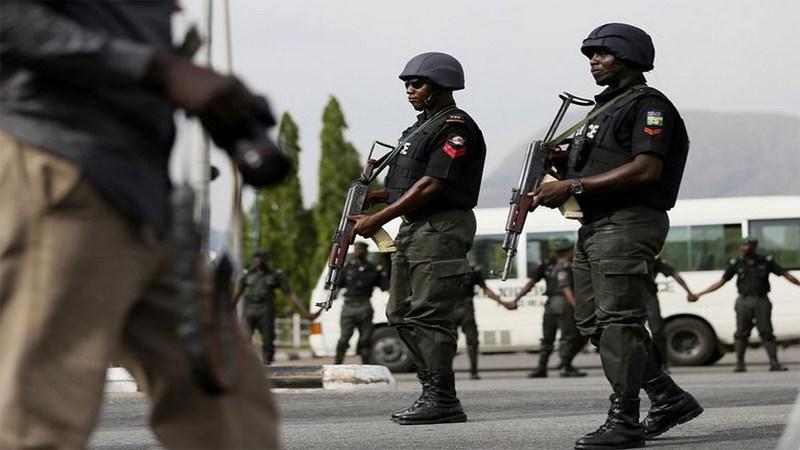 Presently, Nigeria with 36 states is served by an administrative unit which is known as state command.

The state command is grouped into 12 zonal commands with two to four states in each zone under the supervision of an (AIG) Assistant Inspector General.

State commands are divided into smaller area commands which are headed by a commissioner of police who will report to AIG in each zone. Now let’s talk the responsibilities of these officers.

Duties of the Nigerian Police Force

The duties of police officers are more than to pull people over, they perform multiple duties, therefore their work is really tough because they must be on duty round the clock, though police force works in shifts.

Here are some duties of Police officers

Now that you already know that police officer do more than pull people over, our lives and properties are safe in their hands (at least to some extent).

Don’t you think we need to respect them and we also need to know more about their ranks and salaries? Now let’s talk about the Nigerian police ranks.

The Nigerian Police ranks are divided into three structures which are:

I will like to talk about the Authority structure of the Nigeria police force in order of hierarchy. 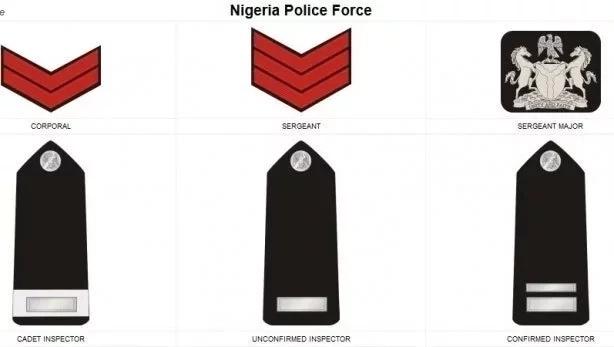 The Nigerian police ranks go from the highest to the lowest starting from the rank of inspector general of police.

Promotion is not automatic and usually requires the candidate to pass some kind of examination, interview or other selection processes.

The fact is, a police officer has to serve his country in order to climb the ladder as this normally comes with an increase in salaries.

The rank is divided into two categories:

He is responsible for everything going right and wrong in the Police force and reports directly to the president.

The Inspector General which is the highest, in Nigeria Police ranks is, therefore, the head of the Police Force in Nigeria.

The Assistant Inspector –General is also the second in command to the Deputy Inspector General of Police, and this rank is the third highest in Nigerian Police ranks. Also, he is senior to all commissioners.

Each state command is headed by a commissioner of police who will account to the Assistant inspector general. This is the fourth in the Nigeria police force ranks.

This rank is above chief superintendent and below the deputy commissioner of police in the Nigerian police ranks.

This is the number seven in the Nigeria police force ranks and it is higher than the superintendent of police.

It is the second lowest senior rank and it is subordinate to deputy superintendent in the Nigeria police ranks.

It is the lowest in the Nigerian police ranks after undergoing training of service as a commissioned officer. 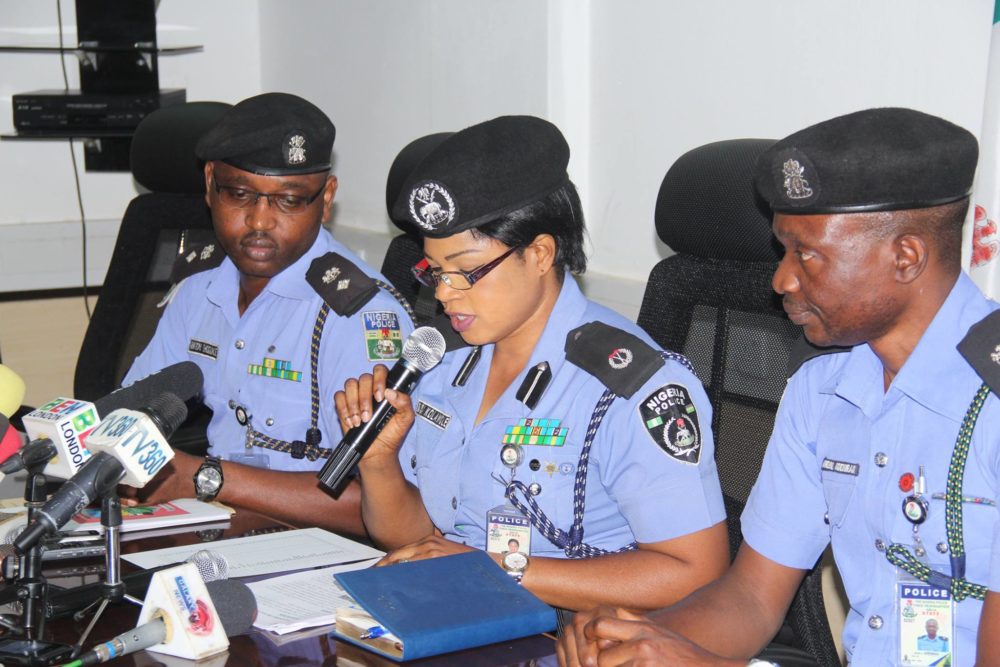 Nigerian Police Ranks and Their Salaries

Do you even know that the police work did not start as a paid profession? It rather started as a noble and honest profession.

So, would you like to know how much police officers take home at the end of the month?

Is risking their life worth their paychecks? Nigeria police officer salaries depend on his/her ranks in the Nigeria Police Force.

There are also many additional benefits in the Nigeria Police Force such as job security, sick leave, health insurance, and job security.

NOTE: Some of the positions are divided into two or more grades, levels and steps and this has specified a position in a scale of preference, in the Nigerian Police ranks listed below.

Commissioner of Police on Grade 15 (Step 1)

Superintendent of Police on Grade 11 (Step 1)

Duties of Assistant Superintendent of Police in Nigeria

Assistant Superintendent, or assistant superintendent of police (ASP), was a rank used by police forces in the British Empire.

It was usually the lowest rank that could be held by a European officer, most of whom joined the police at this rank. In the 20th century, it was in many territories opened to non-Europeans as well. 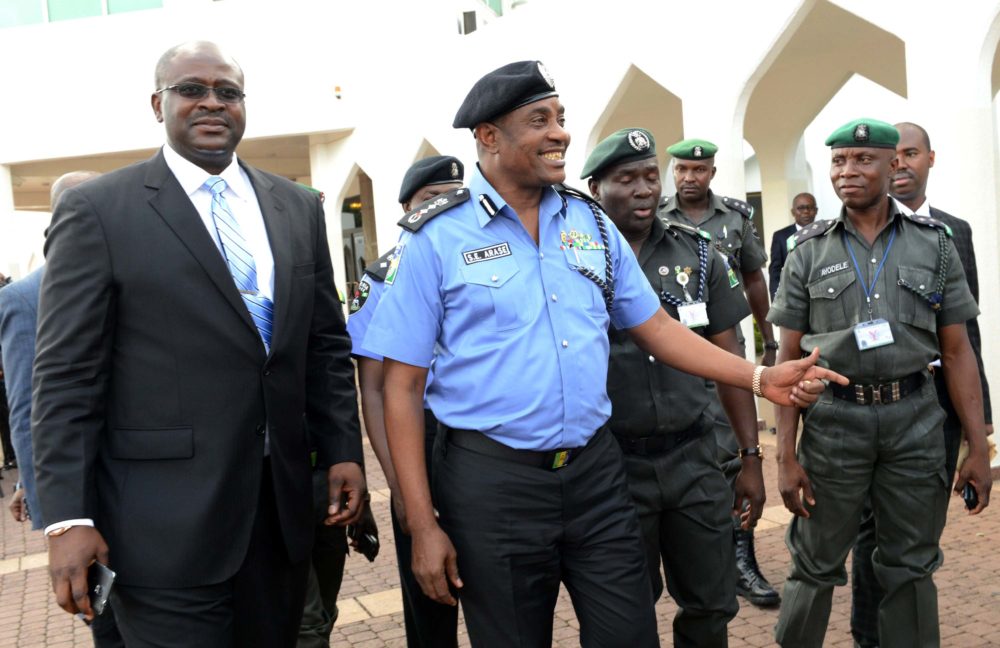 Today, this rank is found throughout The Commonwealth in police ranking structures including the UK’s Scotland Yard and the Royal Canadian Mounted Police and Commonwealth Caribbean states. The rank is above inspector (chief inspector) and below superintendent.

The Assistant Superintendent of Police in Nigeria is selected by the head of the Police Force in a state, The Commissioner of Police, to eligible candidates that must have achieved the Inspector of Police rank.

The level is directly below the Deputy Superintendent of Police rank, and is the sixth-lowest rank, above the Inspector of Police; Major Sergeant; Sergeant; Corporal; and the Constable.

State commands are divided into smaller areas commands, police divisions, police stations, police posts and village post which is headed by a DPO.

Meaning of DPO in the police force is a divisional police officer.

DPO’s are the most senior officer closest to the people in the community, and they have many police officers under their control and command.

A DPO reports to Area commander, who reports to the Commissioner of Police in the state, and in turn, reports to Assistant Inspector General that controls and commands a few states in the zone.

In most cases, this Nigeria police rank (DPO) leads other lower ranks in their team, and they are linked between the senior and junior officers.

The Divisional Police Officer in the Nigerian Police ranks is very important and care should be taken to select who to make a DPO.

A Divisional Police Officer rank is seen as an official representative of the government that must carry out his functions effectively and efficiently.

A good Divisional Police Officer must be a good listener, takes his decision and moves on without holding over, and he must not be influenced by the rich and powerful people in the public, therefore he must maintain good balance.

The maintenance of Nigeria police ranks is important in order to avoid disorder and confusion.

Also Read: Who was the first military head of state in Nigeria 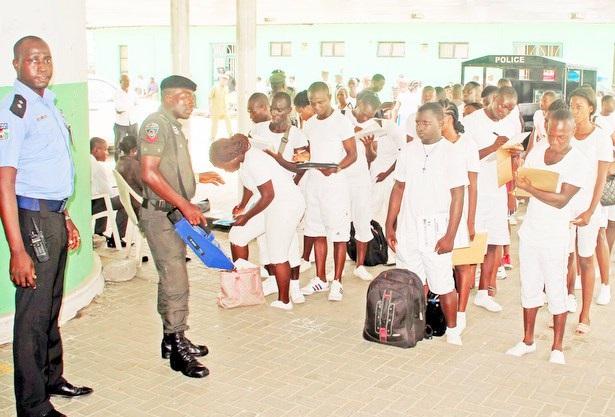 The following are the requirements for Nigeria Police Form Recruitment:

You must also take note of the following if you want to apply for Nigeria Police recruitment.

NOTE:  You will be required to present a hard copy of the Email message sent to you if you are shortlisted and contacted, for the next stage of the recruitment process.

No Email and phone number can be used more than once in this application.

Applicants with multiple applications would be disqualified.

The Nigerian Police Force shall not enter into any correspondences with a candidate or on behalf of candidates in this exercise aside this portal or candidates Email or telephones.

This is the official portal where you can always get the latest information about Nigeria Police Force, and this portal will help you understand more about how Nigeria police test applicant and how Nigeria Police shortlist and verify newly qualified candidates.

The Nigeria police recruitment portal was purposely designed by the Federal government to recruit new personnel. Feel free to visit the official website of the Nigerian police force via http://npf.gov.ng/ for every information you need.

The Police Ranks and Symbols PDF

You may want to keep this information for offline use so we’ve created the Nigerian police force ranks and their symbols pdf.

To be honest, many Nigerians have lost confidence in the police force, due to the acts of some of its operatives.

Police officers need to be honest, kind and clear when communicating with those who break the law.

Also, maintenance is also needed in the Nigerian Police ranks from the highest ranking officer to the lowest officer.

I hope and believe that this post will really help many young people who desire to make a significant career in the Nigeria police force.