Before the introduction of Nigeria Civil Defence Corps salary, Nigeria was an almost so peaceful country from 1960 until chaos led to the rule of the first Nigerian military head of state.

Subsequent rebellions also gave birth to other incidents with names. One of which still reminds us of everything it is made up of, from its past to present and threats of probable future, BIAFRA.

We have also written about the Peace corps salary, history, recruitment, training photos, and more. You should check that out.

History did not talk of NSCDC, talk less of Nigeria Civil Defence Corps salary structure and benefits to its employees, until the year 1967, when Odumegwu Ojukwu and others established Republic of Biafra.

You might be interested in knowing the structure of the Nigerian police ranks and their salaries, we’ve got all you need in the link to that post.

History has it on record that Nigeria Security Civil Defence Corps NSCDC was established in May 1967.

It was established due to the unrest that was felt by the citizens of the different local governments in Lagos, due to the brewing of the first civil war in the country.

The state government, concerned about the protection of its people, formed a group of people to educate these citizens on how to protect themselves. This group was called “Lagos Civil Defence Committee”.

Since Nigeria gained her independence, the chaos that had been happening had been between the political bodies although ethnics had a role to play.

The civil war that broke out in the year 1967 was the first in Nigeria.

No one knew how to protect themselves in this new situation except the military. You should know that NSCDC is an acronym for Nigeria Security Civil Defense Corps.

The Lagos Civil Defense Committee educated the citizens of Lagos state on how to protect themselves in the face of the potential dangers then such as bomb attacks, air raids, etc.

So the salary structure was containing details on the Nigeria Civil Defence Corps salary.

14 years after, it was no longer exclusive to Lagos; it became one of the country security agencies. The Nigeria Civil Defence Corps salary was now handled by the Federal Government.

A reorganization of this Para-military body in the year 1988 saw the establishment of various levels or ranks in the organization; along with hierarchy of command and authority and also difference in the Nigeria Civil Defence Corps salary according to levels attained.

While other security bodies were established on their different dates, NSCDC was founded in May 1967; with the Nigeria Civil Defence Corps salary structure inclusive, to protect civilians of the country. 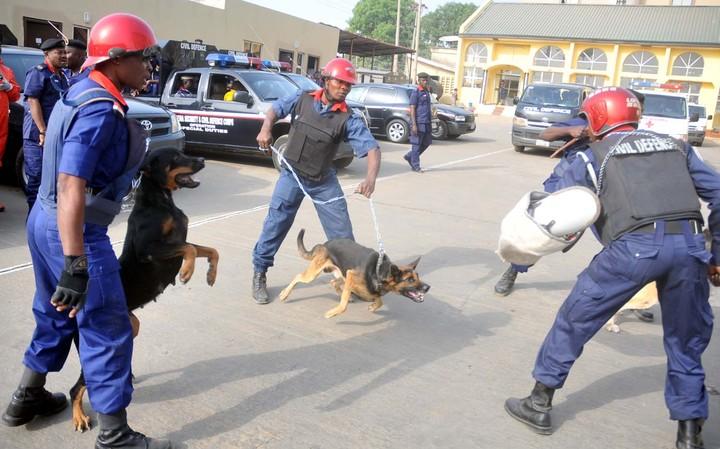 The roles of this security agency under the Federal Government include the following:

What is the official website of the NSCDC? Hmm. I remember my Oga at the top palava… If you know you know lol.

The official website of the Nigeria Security Civil Defence Corps is www.nscdc.gov.ng. The website page has got a menu bar with the following options:

Vital information such as the Nigeria Civil Defence Corps salary structure, levels of authority, each civil defense officer salary according to their ranks, etc can be found on this website.

The Nigeria Security Civil Defence Corps is a security organization under the federal government with graded sub levels.

Below is the hierarchy and ranking structure of the Nigeria Security and Civil Defence Corps. The lowest level is level 3 and the highest, level 18, the level of the Commandant General.

Now to the good part:

Just like in the civil service commission of Nigeria and also every establishment, every officer has a different pay rate, depending on their rank.

For example, Level 7 officer of the NSCDC Inspectorate Cadre gets an estimated monthly pay of ₦69, 000 per month while a Level 8 Assist. Superintendent Cadre receives about ₦121, 000 monthly.

For more nscdc latest news, please visit the official website of the NSCDC as given above.

Quick Read: List of All Presidents of Nigeria From 1960 Till Date

The Civil Defence, Fire, Immigration and Prisons Services Board (CDFIPB) for a while now has approved the promotion of some qualified officers and men of the Nigerian Prisons Service on Consolidated Paramilitary Salary Structure (CONPASS) 08 to 16.

This include officers on lateral conversion from inspectorate cadre to officers’ cadre due to the acquisition of additional qualifications. 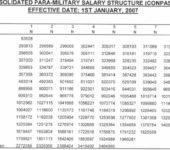 The Nigeria Security Civil Defence Corps (NSCDC recruitment) exercise is carried out to absorb qualified citizens of Nigeria into the organization and also pay them the Nigeria Civil Defence corps salary for the roles they will also carry out.

To participate in the civil defense recruitment exercise, the following requirements are to be met:

…and other requirements that can be found on the official website of NSCDC.

Despite fulfilling all these requirements, the NSCDC is not ready to pay the Nigeria Civil Defence Corps salary to unqualified and uneducated citizens as the lowest educational qualification required is National Diploma from a recognized institution.

Despite all steps taken by the government and money spent on security, the Nigeria Civil Defence Corps salary is not left out among other civil defense officer salary; we remain concerned about security in what has become of our country or what is left of our country today.

I mean, look carefully around you and answer this question: what do you see? Listen to the radio, what do you hear?

Let us read the newspapers, what do you read? How about the television, what is happening in that state you are not?

Hmm…While some of us have pretty good knowledge about what security is and the roles these security agencies are paid for, the Nigeria Civil Defence Corps salary is one of those pay, some of us do not.

But here is a question for all: who is responsible for our security and protection in the country?

Here is an answer: WE ARE FIRST RESPONSIBLE FOR OUR SECURITY, each man or woman is responsible for his/her security first.

Then, the security agencies in the country and those on the payroll of such security agencies, those paid the Nigeria Civil Defence Corps salary, and civil defense officer salary including those that are not omitted from the immigration salary structure.

I’m sure you’ve got an idea of the salary structure of the Nigeria Civil Defence corps isn’t it? Found this post helpful? Let’s have your comments and don’t forget to give this post a like and share.