Did you know that military rule in Nigeria brought about a lot of bloodshed in the past?

Did you also know that the Military army overthrew a government and killed many of the country’s political rulers? What led to such incidence?

For some who weren’t born by that time here’s is a privilege to learn about Military rule in Nigeria. Would you like to know more? Let’s take it a step at a time as we journey back some years ago.

What Is Military Rule In Nigeria?

Military rule or regime is systems of government where there is complete or substantial control exerted over political authority.

Now the thing is the political power completely resides with the armed forces and so they have the ‘FINAL’ say.

Nigeria became a British protectorate in 1901 and gained her independence from the United Kingdom on 1st October 1960 led by Prime Minister, Alhaji Sir Abubakar Tafawa Balewa who was championing the executive council made entirely up of Nigerians.

This means the colonization came to an end and that’s a good one though. It’s also good to note that something led to something along the line.

One could wonder that, if Nigeria got her independence where they can self-govern themselves having fought tirelessly with determination, they were eventually able to convince the British colonial masters of the need for independence and capability to self-governance.

Education was also a powerful weapon used because the likes of Chief Obafemi Awolowo, Nnamdi Azikwe and Tafawa Balewa amongst others were academically knowledgeable.

With all these pre-achievements, funnily Military rule in Nigeria still holds. Wondering why? Join me as we go down memory lane.

Characteristics of Military Rule In Nigeria or Regime

The military rule or regime is always governed by a military personnel or officer either active or retired. So when a Military man is talking, who are you to talk or even to cough? Those present then can truly relate.

Also Read: History of The First Military Head of State

History and Structure of Military Rule in Nigeria Since 1960

Since 1960 after the independence was acquired under the leadership of Alhaji Sir Abubakar Tafawa Balewa, there were cases of Military coups in Nigeria.

Alhaji Tafawa Balewa was a Nigerian politician and the first prime minister of an independent Nigeria back then. The question for the ones growing is what is a military coup?

A military coup which can also be referred to as Coups D’état or Coups D’états where there is a violent or non-violent overthrow of any existing government by the Military which simply implies that the military would be in government; remember any order given is final o.

Therefore, since independence and trying hard to adapt to a new system of being independent owing to the fact that the country was in an infantile stage, the Military rule history began on the 1st October, 1966.

Prior to the first military coup in Nigeria, on august 1965 a group of army majors which includes Patrick Chukwuma Kaduna Nzeogwu (ring leader, Igbo), Emmanuel Ifeajuna (a high jumper and a principal role player in the coup, Igbo), Timothy Onwuatuegwu (a Biafran army and participant in the coup, Igbo)

Did you notice the ethnic backgrounds of people that made up the first military coup? Hmmmm lemme keep mute o, these men also conspirators began plotting a coup d’état against incumbent Prime Minister Abubakar Balewa.

Basically, the aforementioned planned the first ever coup and thus executed. One could wonder but the prime minister is a civilian Na why planning to disrupt his government?

It was discovered by the majors that the ogas at the top were running Nigeria aground with so much corruption; they were living flamboyant lifestyles and looting public funds at the expense of ordinary Nigerian citizens, very sad right? Was it not meant to be government for the people? I wonder o. 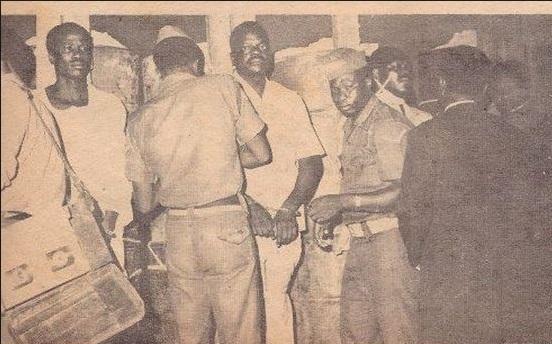 The first military coup which overthrew the then prime minister Sir Tafawa Balewa from power happened on January 15, 1966.

It is unfortunate that he wasn’t just overthrown but also murdered. How sad it is as his body was found by road side near Lagos six days after he was ousted from office.

Sir Tafawa Balewa wasn’t only the victim of the January 15 coup; also the Sardauna of Sokoto Sir Ahmadu Bello (the first and the only Premier of the Northern Nigeria region), the premier of the western region Samuel Ladoke Akintola, the finance minister Festus Okotie Eboh amongst others. 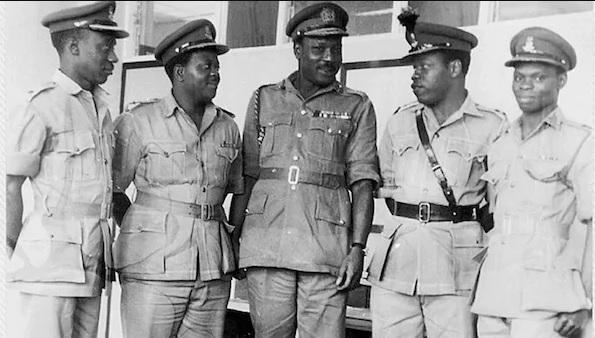 Still in the year 1966, the month of July, remarkably, General Aguiyi-Ironsi emerge power to calm the chaos resulting from the first ever coup unfortunately another coup sufficed and he was murdered o, he literally ruled from 16 January to 29th July 1966.

Also Read: Jamb cut off mark for all schools

Features of the July 1966 Coup

July 1966 Coup was also known as the July counter coup

General Johnson Thomas Umunnakwe Aguiyi-Ironsi was succeeded by General Yakubu “Jack” Dan-Yumma Gowon and was in power from 1966-1975. Did you know that General Yakubu Gowon is the pioneer of the creation of state and capital in Nigeria? Now you know.

It is remarkable to note that during his reign in government, he established a supreme military council and he successfully prevented Biafran secession during the Nigerian civil war from 1967-1970.

He achieved this by weakening the eastern regions support base by replacing the four regions to the creation of twelve states, whereby six of these states were majorly minorities who had been craving for states creation since 1950s.

This made these eastern minorities handicapped as they won’t partake actively in supporting the Igbos with the hope of having their own states, smart right?

And there was a season of rehabilitation, reconstruction, and reconciliation as Nigeria enjoyed an oil-boom economic turnover as there was an increased earnings from oil revenue. Sadly it turned out to a period of corruption to the full by the officials.

Brigadier (later General) Murtala Mohammed, succeeded General Gowon. Another coup occurred in 1976 popularly known as the Dimika, which led to Murtala Mohammed’s assassination and so Lt Gen. Olusegun Obasanjo assumed power as the head of state.

Uncle Sege dissolved the supreme military council and handed over to elect Shehu Shagari which ended the first republic while in 1983. You should read more about The Nigerian government in this post as it features transitions from first republic down the line.

He was overthrown, meaning another Military coup ensue on December 31, 1983 where senior officers played a vital role to kick out democratic elected president participants.

Then Major General Buhari was appointed as Head of state by the cohorts. You can imagine when a plot member, a conspirator appointing himself with the position of President of the Armed Forces Ruling Council of Nigeria overthrowing Major Gen. Buhari in august 1985.

[Tweet “Be careful of your inner circle my honest advice”]

Transfer of power occurred as if it’s transferring money into my bank account. He (Babagida) resigned and handed over to Ernest Shonekan (1993) on the promise to restore democracy.

Though, Gen. Sanni Abacha overthrew and appointed himself Chairman of the Provisional Ruling Council of Nigeria, until he died in 1998 succeeded by Abdusalami Abubakar then by Olusegun Obasanjo (1999) *sighs*

Also Read: The list of all Nigerian Presidents From 1960

Reasons or Causes of Military Rule in Nigeria

The history of Nigeria can be traced back to when Nigeria gained her independence on 1st October, 1960 from the British colonial masters and became a republic on 1st October 1963.

Prior to that independence, life was good in Nigeria and it was observed that there arise certain issues which led to the Military rule Nigeria.

Advantages, Impact or Achievements of Military Rule in Nigeria

To be honest we can’t rule out the fact that everything that as a disadvantage also as its advantages.

We can say this country has experienced both the negative and positive sides of the military rule in Nigeria which has resulted in a cry for democracy.

These positive sides can be said to be a factor that influenced the development of Nigeria under the rule of the Military.

Some achievements and impact of the Military regime in the history of Nigeria includes no room for indiscipline, infrastructural developments like construction of roads, railways, airports among others.

Yes, I know you’d want to keep this for offline use, so we’ve created the military rule in Nigeria pdf file.

The military succeeded in the aspect of creating new states and local councils. National integration was promoted by way of introducing National Youth Service Corps.

The military rule in Nigeria clamped corruption to an extent, initiated mass-orientation programmes such as OFN, DEFRI, NDE, among others.