Who enjoys Yoruba movies like I do these days? Well if you are in that category gather here, let’s take a selfie together…….lol.

So I will be sharing with you in this article the latest Yoruba movies you should see, the unforgettable ones, lessons to learn in these movies and more. 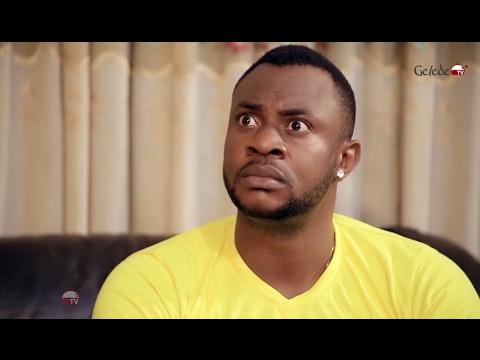 Without further ado let’s get started.

We cannot talk about Yoruba movies and not mention Nollywood, no way. The Yoruba film industry is a part of Nollywood which is the general name for The Nigerian film industry.

Nollywood is globally recognized as the second largest film producer in the world with its significance in the arts and entertainment sector. The Nigerian film industry consists of the Yoruba film, Hausa film, Igbo film and the English film.

The historical trajectory of Nollywood started since the pre and post independent Nigeria with theoretical (stage), and the cinematic (celluloid) efforts of the likes of chief Hubert Ogunde, chief Amata, Adeyemi Afolayan, Baba sala, Duro ladipo who are the trailblazers of Nigerian film industry.

Yes, the Nigerian movie industry has since then grown and expanded into what we have today.

Films are produced for various reasons; some to teach about culture, others to make you learn lessons about things happening around us every day, some could just be to make us relax and have a good laugh.

We also have some that teaches us about marriages and the home, others to motivate us that we can do whatever we put our mind to and lots more reasons.

Why You Should Download Yoruba Movies And See Them 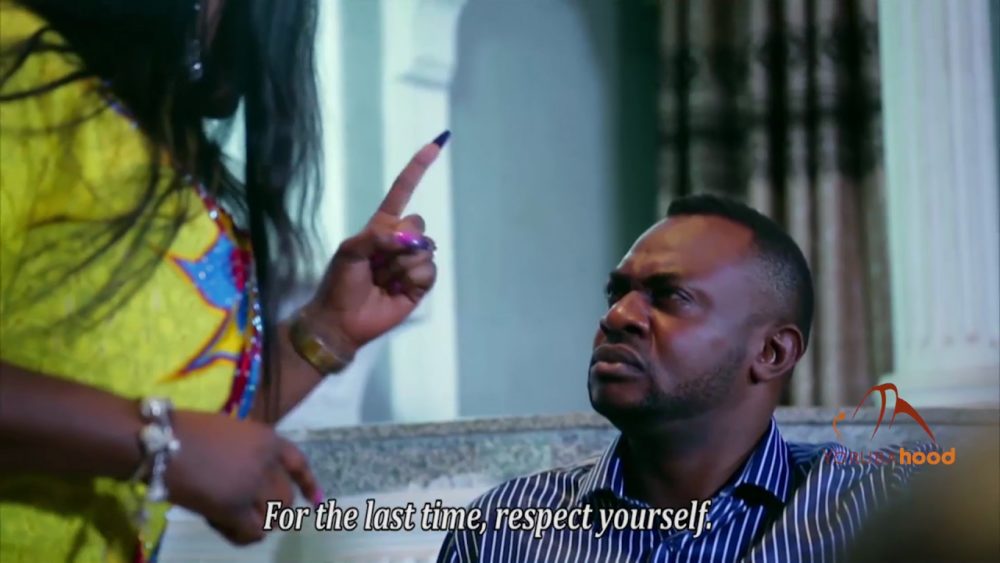 Yoruba movies are filled with great lessons and it teaches us so much about our rich culture.

Now that we are in the 21st century, everyone tend to do things the western way and some Yoruba children cannot even speak Yoruba or understand the language, seeing a Yoruba movie often helps to teach these children.

Yoruba’s don’t just choose names; there is significance and meaning to every name given to a child. Yoruba movies also teach about histories of our culture, they teach stories of Ogun, Osun, Sango and the likes.

Yoruba movies have a lot to teach the family as a whole and we have actors like Odunlade Adekola, Muyiwa Ademola, and actresses like Funke Akindele, Mercy Aigbe , Toyin Abraham to mention a few who are always giving it their best shot and making us want to stay glued to watching Yoruba movies.

A lot of people find it hard to download Yoruba movies especially those that are not in Nigeria. If you are in that category worry no more I have got you covered.

Here are the top three websites to download Yoruba movies from.

Ibaka Tv was launched in 2011 by Blessed Idornigie. It is a video on demand platform for Nollywood movies  with over 15,000hrs of movies.

It is divided into four major channels which are Ibakatv/NOLLYWOOD, ibakatv/YORUBA, Africamagic Clip and Ibaka tv.

Ibaka tv has the largest online catalog of Yoruba movies, it also has a mobile app which was introduced to make Yoruba movies accessible to subscribers on the go. 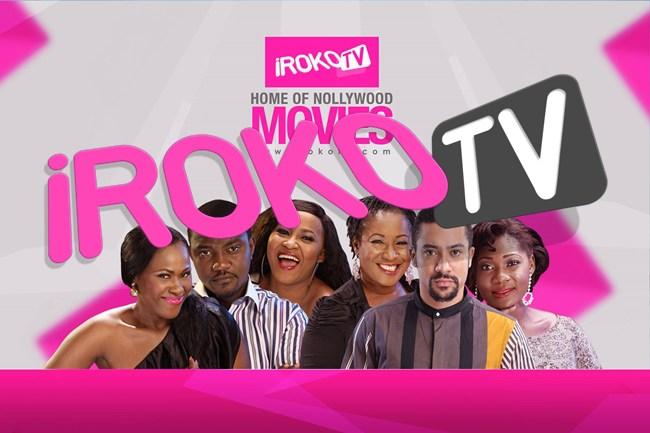 Another website for Yoruba movie download is Iroko tv. It is a web platform that provides for Nigerian movies on demand. It has access to over 5000 Nollywood movies

It was launched in 2011 by Jason Njoku and Bastian Gotter in 2010, it also has a feature that allows users to download and watch offline later.

Yoruba movies can also be downloaded at Nigeria movie network, this website is often visited by people who are in search of Yoruba movies to download.

Those who have registered to this website can save movies to watch later and also create a playlist to share with their friends. To get instant movie download visit this website and thank me later.

So we know movies are being released all the time right, I will he giving you five latest Yoruba movies that are produced this year. 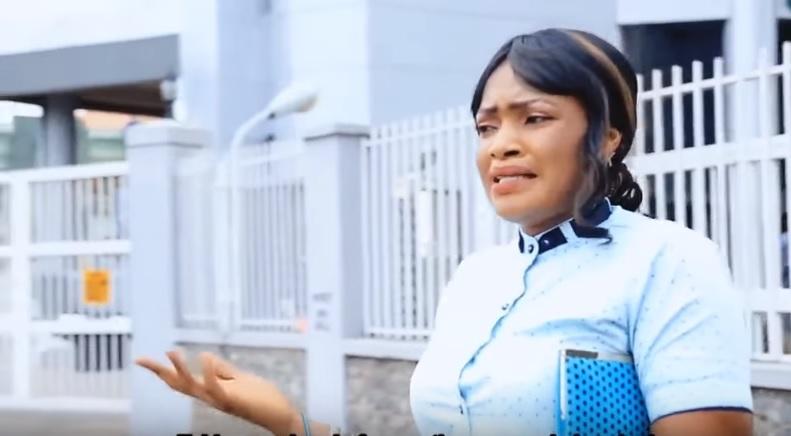 This movie was is one of the latest Yoruba movies I will recommend that you see. It features actors and actresses like Ibrahim chatta, Jayeola Kuti, Olatunji Afolabi to mention a few.

It tells the story of a man who was so in love with his wife and their marriage was enviable by everyone and then suddenly he tells his wife to help him carry out a ridiculous task and everything began crumbling for them.

There are lots of moral lessons to be learnt from this movie, how a home can go from being peaceful to chaos and how husband and wife can be at each other’s throat.

Go grab a copy of this movie and thank me later. 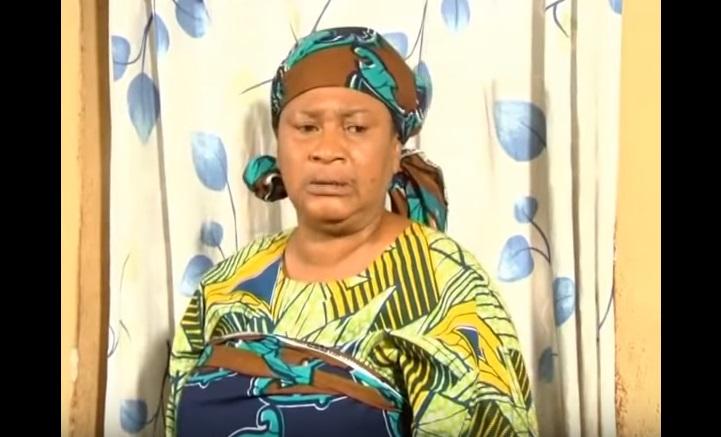 Another Yoruba movie to check out is Ayanmo (destiny). This movie tells us the story of a young lady who got ruined by the works of her hands. The saying that whatever you sow you would reap is true.

This is one of the latest Yoruba movies that is packed with a lot of things to learn. 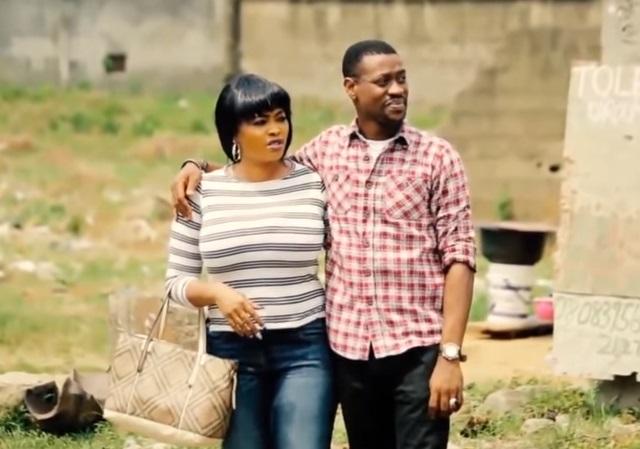 Honourable tells us about the unbelievable story of two political aspirants who are at loggerheads with each other over a political post.

One of them is a family man who is running desperately for second term and the other is a man who is aspiring to win and truly serve.

Their fight got to a new level where danger and death is involved. This movie features stars like Saheed Balogun, Taiwo Ibikunle, Dele Odule and so on.

This movie teaches and reveals a lot of what is happening with leadership in our country. I am sure you would learn a lot when you grab a copy of this movie or download as the case may be. 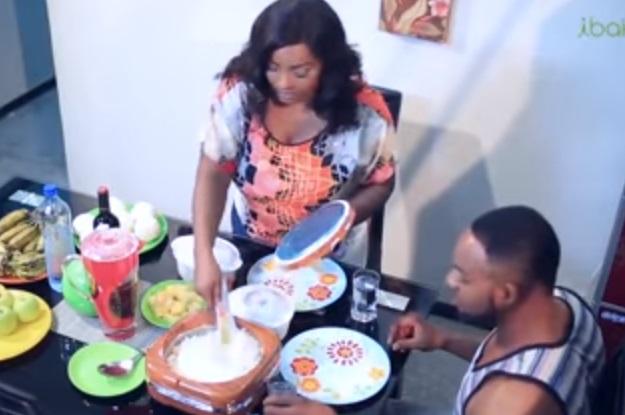 This is a romantic Yoruba movie that tells the story of an admirable couple who love each other so dearly and without Control.

And then, a big mistake made by them brought disdain, hate and abuse into their beautiful home.

This Yoruba movie is a romantic and an emotional one that you would love every minute spent seeing it.

This movie features actors like Gabriel Afolayan, Ronke Odusanya, Ireti Osayemi. I am telling you there is a lot one can learn from this movie. 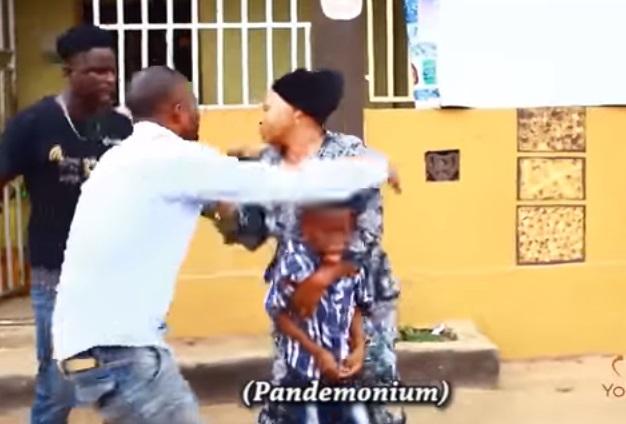 This is a movie that tells the story of a man who despite what his mother was putting his wife through in their matrimonial home, he has never disrespected his mother or question her bad behavior and attitude ever until a situation came up that made him question her.

This Yoruba movie features actor like Odunlade Adekola, Fausat Balogun, Okele and many others.

In this movie you’ll learn that as male child you shouldn’t let your mother disrespect your wife and also, let your mother know as an adult you have a mind of your own and you can question her behavior when you see fit.

Also Read: Top 12 Richest Actor In Nigeria and their Worth

Top 4 Yoruba Movies of All Time

Come what may there are some Yoruba movies that will always be evergreen whenever it is being seen. I will be talking about five of these in no particular order.

I am not saying there aren’t others like them in the film industry, but these are the ones that do it for me and I know some of you will agree with me. 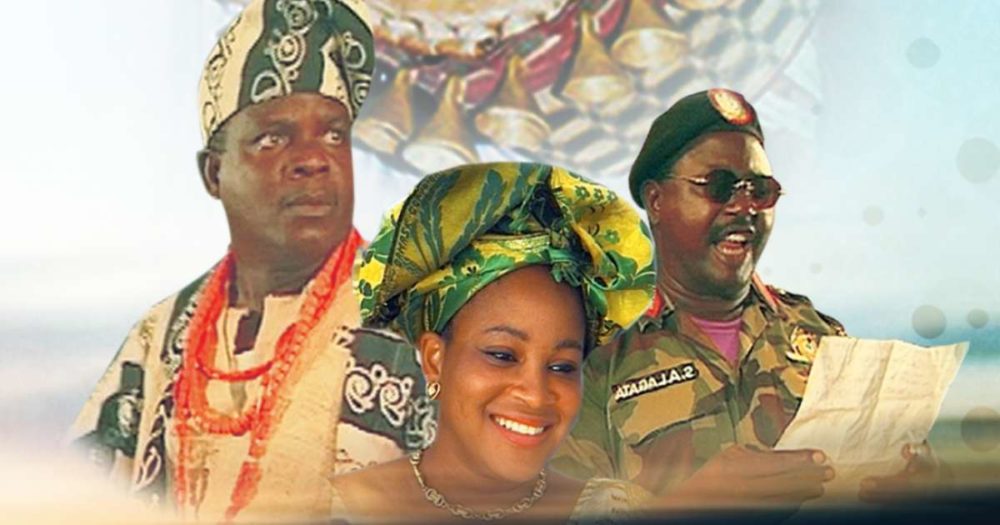 This is a movie that was released as far back as 1999 through mainframe films and television production, its director Tunde kelani is a top film maker In the Nigerian movie industry.

Saworoide is a play with casts of actors like Lere paimo, Kunle Afolayan, Bukky wright, Kola Oyewo etc. I choose this movie because it teaches about how corrupt leadership almost ruined the land of Jogbo like it is happening in Nigeria presently.

Saworoide teaches about our culture i.e a crown has to be worn by the right people in these case if the wrong person wears the crown and the saworoide (a special talking drum) is been beaten, the wrong person would have a chronic headache till he dies.

This movie is packed with lessons and would make you stay glued to your screens whenever you watch it. 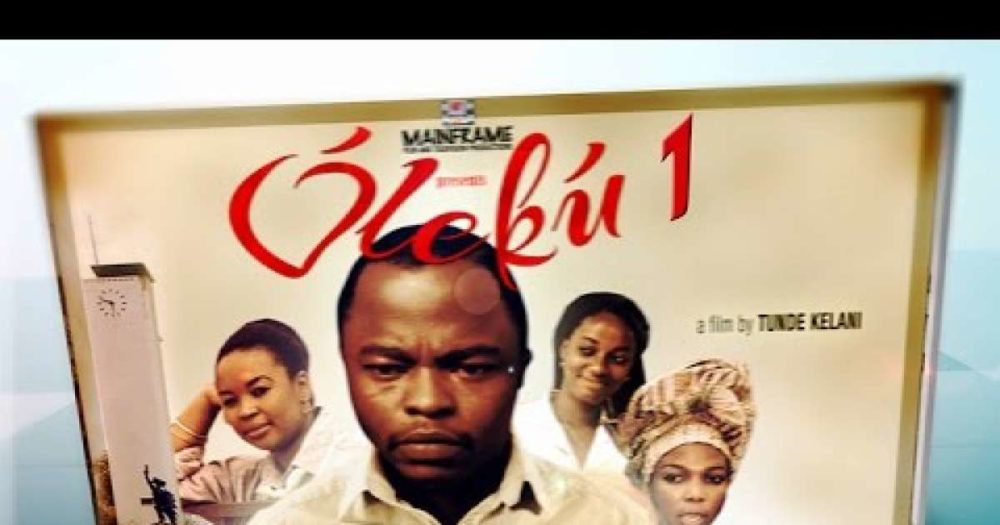 This is another Yoruba movie that stays fresh irrespective of when you watch it, it is a classic love movie.

Oleku tells a story of a man looking for a life partner due to pressure from his mother and how he found himself in a love quadrangle.

This movie teaches us majorly about love, marriage and pressure from parents to get married. It was released in 1997 and written by Akinwunmi Ishola, the movie producer is Tunde kelani.

Oleku is a Yoruba movie you would be glad you watched trust me. If you haven’t seen this movie, you are wrong. 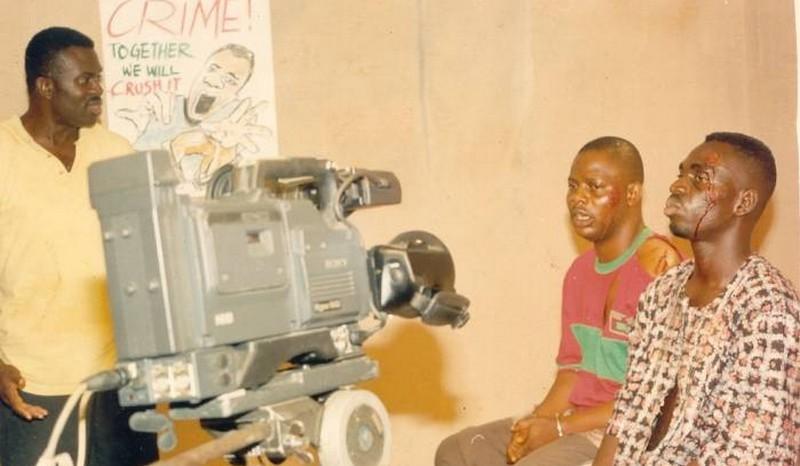 On my list of evergreen Yoruba movies I have Owoblow, a movie produced by Tade Ogidan and written by Niyi Wuraola. This is a suspense filled movie and it is filled with a lot of lessons.

This Yoruba movie depicts everything that goes on in our society, from injustice to unemployment, jungle justice, police brutality and unlawful detention.

It is a movie that teaches all round  Morals and lesson of what is going on in our society……this movie is what I call old but still very golden. 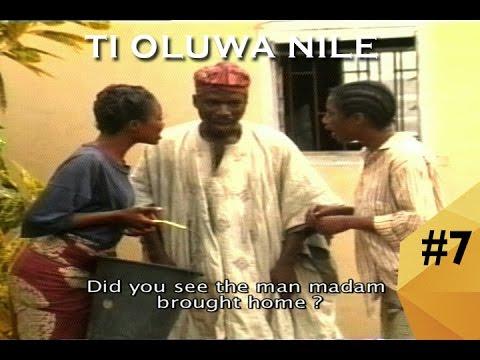 I have here another Yoruba movie of all time written by Kareem Adepoju, this movie tells us about the situation surrounding urban beliefs and socio cultural practices.

This Yoruba movie tells us about a man that sold an ancestral land to a rich man at a huge amount of money and he has to face the consequences of his actions.

It is a power packed movie with lessons about how greed, unbelief, lies, bad behavior can ruin a life.

Actors and actresses who feature in Yoruba movies have worked hard and they are making a living from acting.