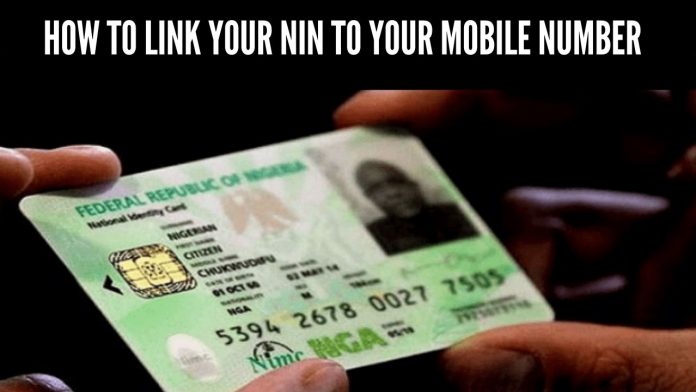 Looking for quick info on How To Link Your NIN To Glo, MTN, Airtel & 9mobile Network? We’ve got you covered.

The Nigerian Communications Commission (NCC) had earlier instructed the telecommunications service provider to disconnect all customers that are not registered with their National Identity Numbers (NIN) within 2 weeks.

Any subscribers who fail to register with NIN will be disconnected from using their mobile line by the end of the year.

Despite the Covid-19, Nigerians have to ask NCC to provide ways they can easily link their mobile number to reduce the spread of Covid.

Not quite long, BVN was introduced in Nigeria and today, it has come to stay. Here’s how to check your bvn number if you haven’t.

What Is NIN Number

The NIN number is also called the National Identification Number. It is a unique number assigned to an individual upon successful enrolment and during enrollment data such as Demography, occupation, state, and more are collected.

For Nigerians, who already have their NIN and are unable to link their phone numbers to their NIN. Here are easy steps to link your NIN to your Phone number:

How To Check Your NIN Number Using Your Mobile Number

You will Dial *346# to retrieve your National Identification Number (NIN), available on MTN, Airtel, Glo & 9mobile.

How To Link your NIN to your MTN Number

The following ways can be used to link your NIN to your MTN Number by using the official website or a mobile shortcode (*785#).

To link your NIN using your Mobile Number:

if you get an error, just wait for some time and try again with the linking.

How To Link your NIN to your Glo Number

To link your NIN number to your Glo number is by visiting the Glo official website for NIN registration.

Another Way To Link Your NIN number to your Glo Number

How To Link your NIN to your Airtel Number

You can link your NIN to your mobile number on Airtel Network by using the shortcode through the steps below:

if you get an error, just wait for some time and try again with the linking.

How To Link your NIN to your 9Mobile Number

To link your NIN number to your Etisalat/9Mobile number is by visiting the nearest 9Mobile outlet with your NIMC form (Or your NIN number) and your 9Mobile sim pack.

After contacting 9mobile on Twitter, The company is yet to release any means of linking but have plans on doing that as soon as possible.

Failure to link NIN to your mobile number before the end of December will result in the customer being blocked.

How To Confirm Your Mobile Number Registration Status

After you have followed the steps above to link your phone number, it is advised to check & confirm if your verification was successful:

Here is how you can do that on various networks: