Consequences Of Child Marriage In Nigeria 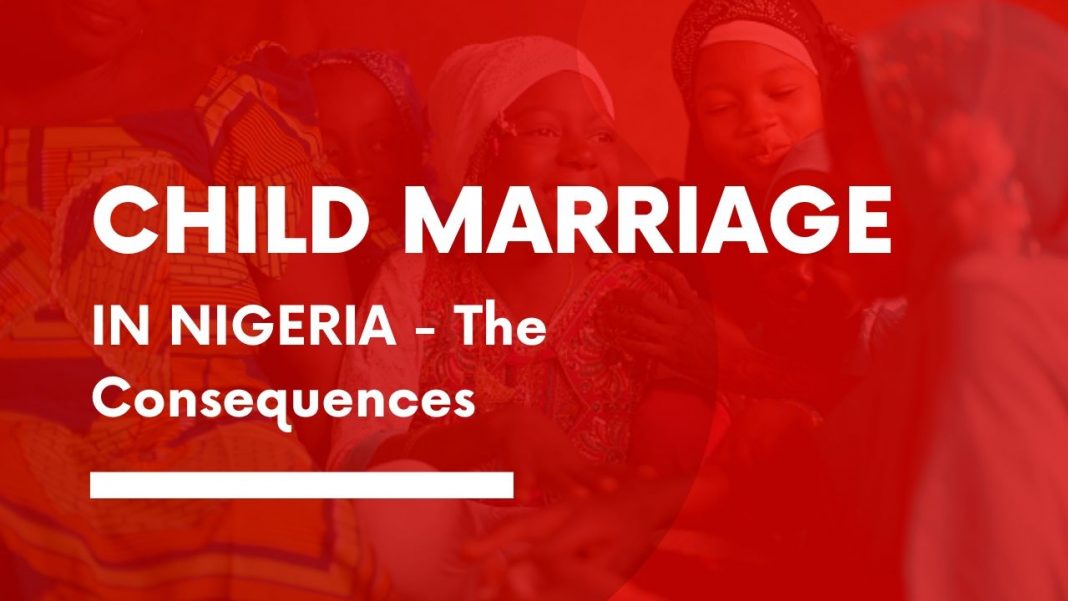 What are the consequences of Child marriage In Nigeria?

The practice is a prevalent issue which has been ravaging the underdeveloped nations, especially in Africa.

Thus, child marriage is the union as husband and wife of either two of underage persons or of an underaged with an adult.

Also Read: Maximum of 2 kids to every couple, should this hold in Nigeria?

This is an ancient practice but it has continued to show its ugly head in recent times.

The legislature through the Child Rights Act recognizes that children are vulnerable and are unable to give free and full consent to certain aspects of their lives, marriage inclusive.

This is because of their underdeveloped and inexperienced minds; thus, in section 21 of the Child Right Act, it provides that, no person under the age of 18years is capable of contracting valid marriage and accordingly, a marriage contracted under such condition is null and void.

However, there are still instances of children marriage in Nigeria, and this practice is caused by a number of circumstances such as:

By virtue of the fact that Africa is still a highly religious continent, there are still instances of many traditional practices some of which are noxious.

In some localities, when a child is born most especially the girl child, she is immediately betrothed to a young man who will marry her when she comes of age.

This coming of age as is being understood by commoners is usually within the age of 13-17.

Also, in some traditional localities, the girl child is used in paying back favors.

This could happen in cases where a man who lent money or did something to a family is promised marriage to the beneficiary’s children in repayment of such favor and in most cases, this type of offer ends up in child marriage.

Poverty is the state of having little or nothing which is required for the sustenance of life.

Nigeria as an underdeveloped country has high cases of poverty/ striking numbers of poor people.

This state usually exerts so much pressure on parents and guardians that they look for every possible means to escape or to ameliorate such a predicament.

In such search for amelioration, they give out their under-aged children either in service or in marriage to readily available suitors.

Here, when parents whom their responsibility is to take care of the children die, there is usually a necessity to look for available replacements or providers who would take care of the bereaved children; and in most cases, the girl child is given out in marriage.

Also, due to the heartlessness of some relatives who blatantly refuse to lend helping hands or to protect the bereaved kids, they end up in child marriage.

This ugly act of child marriage in Nigeria has been provided against or fought against by the legislature through the passing of prohibitory laws, ranging from the Child Rights Act,

Young Persons Laws etc. However, these laws with their consequent punishments are not implemented on the violators in order for them to serve as scapegoats to others.

Thus, many people still indulge in child marriage in Nigeria because they know that nothing will be done to them or because they are not aware of the position of the law on such a matter.

The Consequences of Child Marriage In Nigeria

There are numerous consequences of child marriage in Nigeria no matter how beneficial some persons think that it is. These consequences include:

Violation of the fundamental right of choice.

In child marriages, the victims are forcefully given out by their parents or guardians; this deprives them of the freedom and benefit that accrues from choosing at adulthood, the man or woman who meets their taste of a spouse.

This denial comes with its problems which could be in the form of unhappy marriages, divorce, domestic violence, and psychological issues. It deprives them of their fundamental human rights.

Statistics have shown that there is nothing that kills dreams like child marriages.

In child marriages especially of the girl child, the individual is usually stopped from starting or finishing her education because once she is married, she becomes distracted by childbearing, domestic chores, and the struggle to sustain the family.

And once these happen, education which would have been used to unlock her life potentials and possibilities is set aside, leading to a broken life.

A physically immature girl who delves or is pushed into child marriage is bound to live with challenging health issues.

This usually comes in the form of psychological trauma and physical challenges resulting from unprepared marriage.

A girl’s body organs are required to attain certain maturity to be able to engage in both sex and childbearing, but child marriages deny the body of the opportunity to do so and that leads to high death rates of underage expectant mothers plus other sexual risks.

Girls who are involved in child marriages tend to suffer domestic violence because of their inability to make mature and reasonable decisions, and in some other cases, their older spouses under look them and this results in maltreatment and infringement of the principle of rule of law.

In conclusion, even if child marriages have benefits, from the foregoing, it can be seen that its disadvantages have surpassed their benefits.

Thus, all hands must to on deck to salvage these young kids of this ugly act.

Previous article
Tips to Choose the Right Plastering Trowels
Next article
Why Tree Pruning Is so Important?